Handicappers across the country will have an abundance of great racing action on Saturday, July 30.  Hopefully you will pace yourself and have some funds in reserve to play two very good Quarter Horse stakes Saturday night at Retama Park.

One of three Class-1 tracks in Texas (along with Lone Star Park and Sam Houston Race Park), Retama, located near San Antonio is in the final month of its all Quarter Horse meet.  Saturday evening marks their richest race, the final of the $443,050 TQHA Sale Futurity (RG2). All yearlings purchased at the annual TQHA Yearling Sale are eligible for the futurity and this year's final ten include five fillies and five male juveniles. 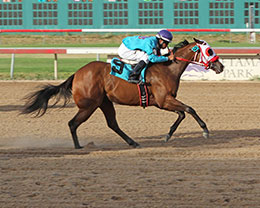 One Sweet Picky will run in Saturday's $443,050 TQHA Sale Futurity at Retama Park.

Trainer Rodolfo Sanchez has qualified three of the finalists, including fastest qualifier, One Sweet Picky, a daughter of One Sweet Jess-Sticky N Picky. She will break from the far outside post under talented rider, Ivan Carnero.  Another top filly for consideration is Maybeyes, sired by Carters Cartel, who was the third-fastest qualifier.  She is trained by Judd Kearl, who continues to increase his lead in the AQHA national trainer standings.  His runners were on fire at Hialeah Park and Sam Houston Race Park, where he won both training titles. Last weekend, he won the $1.2 million Rainbow Derby with Valiant Rogue.  Ignore the Kearl entrants at your own risk!

Saturday's 11-race card concludes with an excellent field set for the $175,700 Retama Park Derby (G3). Especial Cartel, a son of The Louisiana Cartel, owned by Mauro Villarreal and Jose Estrada is the 5-2 morning line choice. His rivals include Rosa Aguado's Gyr Jammer, who brings a three-race win streak into the 400-yard final. Raul Ramirez, Jr. will pilot the gelded son of Apollitical Jess, who won the $370,000 Heritage Place Derby on June 4 at Remington Park, and won his trial with the seventh-fastest time.

Francisco Garza's Tee Chic is the high earner in the field with a victory in the 2015 Oklahoma Futurity at Remington Park and fourth-place finish in the Grade 1 Heritage Place Futurity. He was the ninth fastest qualifier in trials run on July 16 and reunites with jockey Francisco Calderon, who rode him in his 2-year-old campaign last year at Remington Park.  Another very capable finalist is Joel Tipton's Miss Aguilar.  The Tres Seis filly, was prominent last year at Sam Houston, qualifying for the $621K Sam Houston Futurity.

Of course, if you are in the San Antonio area and want to purchase a racehorse, the TQHA Yearling Sale will take place on Friday and Saturday at the Freeman Center. Last year, Kristin Paredes signed a sale ticket on Duponte for just $6,700. He has already won two futurities and earned $578,519 this year!
Racing
Loading...