Tyler Gaffalione Leads in Wins, Named Jockey of the Week 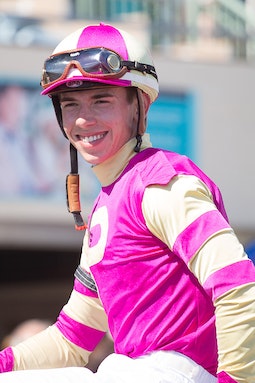 Tyler Gaffalione led the North American jockey colony by wins last week and was named the Jockeys’ Guild Jockey of the Week for May 22 - 29. The award is voted on by a panel of experts for riding accomplishments by members of the Jockeys’ Guild, the organization which represents more than 950 riders in North America.

Over the Memorial Day holiday weekend of racing, many jockeys impressed in individual graded races from coast to coast, but jockey Tyler Gaffalione stayed home at Gulfstream, picking up 35 mounts and winning an impressive 13 times over the course of five days.

In addition to leading by overall wins, he also achieved a four-win day on the Monday holiday race card at Gulfstream. Gaffalione won four of his seven mounts on the day’s card, including two wins for trainer Todd Pletcher, and one each for Antonio Sano and Mike Maker.

Among his wins earlier in the week was a victory in the $75,000 Christmas Past Stakes at Gulfstream Park on Saturday with Susie Bee ($7.00) for Maker and owner Calumet Farm.

He also finished the week with three second-place finishes and five third-place finishes, landing in the money on 60% of his starts and giving him a win rate of 37%. With his 13 wins, he has increased his 2017 total to 124 and his lifetime total wins to 577 in 3,707 starts.

Gaffalione made his Kentucky Derby debut earlier this month aboard Patch, who he had previously ridden to a second-place finish in the $1,000,000 Louisiana Derby (G2). He also rode Kentucky Derby qualifier Fast and Accurate to victory in the $500,000 Spiral Stakes (G3) and notched his first Grade 2 win aboard Enterprising in the $300,000 Muniz Memorial Handicap at the Fair Grounds in April.

Gaffalione was recognized as the Eclipse Award Winner for Outstanding Apprentice Jockey in 2015, when he won 217 of 1,419 starts and earned over $5.8 million. He also won his first graded race that year: the $100,000 Rampart Stakes (G3) at Gulfstream with Cali Star.

Due to holiday racing schedules over Memorial Day weekend, the statistics used for the Jockey of the Week ballot spanned Monday, May 22, through Monday, May 29, 2017.

JockeyTalk360.com spotlights the riders across North America and around the world who may be the bravest, toughest and most accomplished of all athletes. The featured Jockey of the Week is selected by a vote of representatives of America’s Best Racing, the Daily Racing Form, Equibase, the Jockeys’ Guild, the Paulick Report, the Thoroughbred Daily News, National Thoroughbred Racing Association, National Turf Writers and Broadcasters, Horse Racing Nation, Thoroughbred Racing Associations, and Turf Publicists of America.