Upsets were the rule in Saturday's major stakes

Last Saturday marked one of the biggest days in thoroughbred racing when Saratoga Race Course in upstate New York offered the Grade I, $1.6 million Travers Stakes on an ultra-lucrative card worth in excess of $6 million and later that evening Yonkers Raceway near Manhattan presented the Yonkers Trot eliminations for the sport's top three-year-old colt trotters.

Contested within three hours of one another, the Travers and the Yonkers Trot elims would prove to have plenty in common. Both races attracted the respective division leaders of their breed and age, with each having won the year's most prestigious events. American Pharoah, the 1-5 favorite in the Travers, had become the sport's first Triple Crown winner in 37 years when he captured the Kentucky Derby, Preakness and Belmont Stakes and then followed those tallies with a victory in the Grade I, $1 million Haskell Invitational at Monmouth. Prior to Saturday's Travers he had already secured divisional honors and horse of the year.

That same evening at Yonkers the two eliminations of the Yonkers Trot attracted many of the best sophomore trotters in the land, including Hambletonian winner Pinkman. This Jimmy Takter trainee had won his Hambo elim and final on the same day three weeks earlier at the Meadowlands, but then went off stride and finished last in the $500,000 Colonial at Pocono Downs. Despite that setback and the appearance of Crazy Wow, who had prevailed in the Colonial, Pinkman would still go postward as the 1-2 favorite in his Yonkers Trot elim. Suffice it to say it was not an ideal day for chalkplayers.
In the Travers Stakes, the last of six straight Grade I races on the card, American Pharoah broke very alertly and outraced Frosted to the first turn, with longshots Upstart and Smart Transition up close to a modest early pace. American Pharoah coasted through the opening quarter in 24.1 and then by the half in 48.1 with Frosted laying just outside of him. Upstart and Keen Ice stayed within striking distance down the backside, but Smart Transition and Texas Red soon began to fade.

Entering the far turn, Frosted opted to apply some pressure to American Pharoah and now the Triple Crown winner found himself in a battle as jockey Victor Espinosa began urging him. The tandem raced by three-quarters in 1:11.2 and passed the mile mark in 1:35.2 and for an instant Frosted collared the favorite and appeared poised for the upset. American Pharoah battled back bravely along the inside, however, to regain the lead, but that would be short-lived. Keen Ice, who launched his bid leaving the three-eighths pole, was in full flight at the sixteenth pole and overhauled the Triple Crown winner in the final 100 yards to score by a length in 2:01.57 for the one-mile and one-quarter distance. 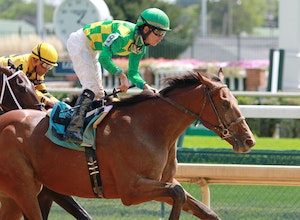 Keen Ice notched his first win in seven starts this year and subsequently handed American Pharoah his first setback in seven outings this year and his first since his career debut last summer at Del Mar. Keen Ice had been seventh in the Derby and then third in the Belmont Stakes and then rallied to finish second in the Haskell. But last Saturday afternoon Keen Ice rallied to post the biggest victory of his career and ended American Pharoah's reputation of invincibility, although the setback further enhanced Saratoga's reputation as "Graveyard of favorites" with an exclamation point.

That same evening at Yonkers Raceway, Pinkman (Yannick Gingras) was made the 1-2 favorite in the first of two Yonkers Trot eliminations, with the top four finishers from each returning for the $500,000 final this coming Saturday. Last year's champion two-year-old colt trotter, Pinkman retained his status as the head of the class by capturing the Hambletonian earlier in the month. But his reputation was tarnished somewhat when he broke stride and finished last in the Colonial last out at Pocono Downs. His main nemesis, Crazy Wow (Tim Tetrick), drew just to his inside.

When the gate folded in the first Yonkers Trot elim, Buen Camino (Trond Smedshammer) left alertly along the pylons to gain the early advantage, with Crazy Wow away well to secure the pocket. Pinkman got away in third but opted not to brush to command. Buen Camino led the field by the opener in 28.1 and then past the half in 58.2 with Crazy Wow tucked snugly in the pocket and Pinkman biding his time from third. He appeared to be traveling well through the straightaways, but clearly was not handling the tight turns.

Buen Camino led the field down the backside and by three-quarters in 1:27.2 where Pinkman loomed a serious threat while first over. But the odds-on favorite could not clear the longshot leader and Crazy Wow continued to benefit from the pocket trip. At the top of the lane, Crazy Wow angled to the passing lane and Pinkman, after struggling on the far turn, found his best stride when straightened away. But Crazy Wow had the trip and got first jump on the favorite and held safe in the lane for a length score in 1:55.4.

Crazy Wow has now won three straight races and six of 10 seasonal starts for trainer Ron Burke. Pinkman suffered his second straight setback, but will get a chance for redemption this weekend in the Yonkers Trot final where he will have to topple a pair of Burke trainees.

In the second Yonkers Trot elimination 20 minutes later, Habitat (Gingras) left alertly to gain command in a modest 29-second opener, got a breather by the half in 58.3 and then drew clear from longshot Southwind Mozart to score in 1:55.3. It was the sixth win in 13 starts this year for Habitat, who gives Burke a solid one-two punch heading into the final. Tuesday's post position draw will go a long way toward determining the outcome of the final, although Gingras intimated that he would opt for Pinkman over Habitat when quizzed on the topic immediately after the two elims.

In a pair of finals for fillies - one each for pacers and trotters - contested on the Yonkers card that same evening, early speed and inside posts proved to be a successful combination, usually the case over the New York half-mile oval.

In the $150,000 Hudson Trot final for three-year-old filly trotters, Murderers Row (Jason Bartlett) benefited from a pocket trip behind Lady Winona (Andy Miller) and then nailed that one at the wire to score in 1:56.3. A daughter of Donato Hanover trained by Chuck Sylvester, Murderers Row notched her second win in eight starts this year and pushed her seasonal earnings past $100,000. Lady Winona was game in defeat. but the Julie Miller trainee finished second for the third straight start and is beginning to secure the bridesmaid role too often having finished second seven times in 15 starts this year.

Then one race later on the card, Purrfect Bags (Victor Kirby) lived up to her role as the 1-5 favorite in the $120,000 Lady Maud final - there were no eliminations needed for this event - when she left, yielded to a foe then immediately retook, fended off pressure from Bettor B Better through the far turn and edged clear in the final 100 yards to a length score in 1:53. A Maryland-bred daughter of Rodney's Bags Again trained by Jim King, Jr. for owner Susan Looney-King, Purrfect Bags has now won eight of 10 starts and earned over $215,000 this year. This was her second open stakes score at Yonkers, having previously won the Lismore final, and her fourth straight tally including a pair of elims and the $100,000 final for the Delaware Standardbred Breeders Fund at Harrington Raceway in Delaware.