War of Will Conquers Opposition in Lecomte Stakes 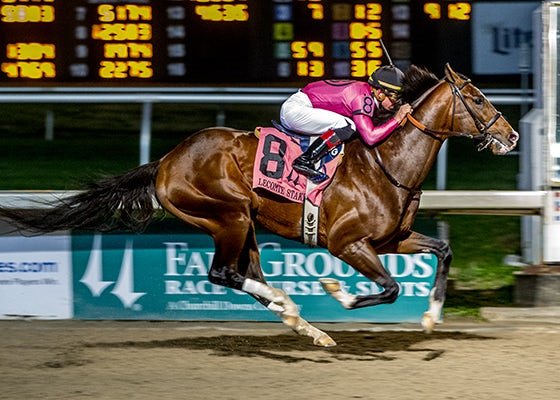 Saturday’s Lecomte Stakes (gr. III) at Fair Grounds was billed as a wide-open race that just about any of the dozen starters could potentially win. But when the dust settled, it was favored War of Will who raced to a resounding victory, crushing the field in the manner of a horse who was clearly superior on the day.

Certainly War of Will stood out from a class perspective. Runner-up in the Summer Stakes (gr. I) at Woodbine and fifth in the Breeders’ Cup Juvenile Turf (gr. I), War of Will had already proven himself at a high level on turf, but he was still something of an unproven commodity on dirt—his lone start on the surface had come in a maiden race over a sloppy track at Churchill Downs, which he won easily enough. As a son of War Front out of a Sadler’s Wells mare (a strongly turf-oriented pedigree) some wondered whether War of Will produce the same result on a dry track against tougher competition at Fair Grounds.

The answer, apparently, is “yes.” After encountering just a bit of traffic in the run around the first turn, War of Will settled into third place early on, stalking modest fractions of :24.33, :49.22, and 1:14.63 while racing on the far outside.

Then jockey Tyler Gaffalione asked War of Will to make his move and the race was over. Rallying smoothly to take command approaching the top of the stretch, War of Will pulled away with authority down the homestretch, extending his lead from two lengths at the eighth pole to four lengths at the wire while stopping the clock in a solid 1:43.44 for a mile and seventy yards. For comparison, War of Will’s time was nearly two seconds faster than the 1:45.34 clocking posted by the filly Needs Supervision in the Silverbulletday Stakes one race earlier on the card.

Hog Creek Hustle, producing a determined rally from eighth place, finished clearly second-best over Manny Wah, who dueled for the early lead before running out of steam in the homestretch. Longshot Wicked Indeed ran an even race to secure fourth place, while the Kentucky Jockey Club Stakes (gr. II) runner-up Plus Que Parfait checked in fifth after stumbling at the start.

Owned by Gary Barber and trained by Mark Casse, War of Will earned 10 qualifications points on the Road to the Kentucky Derby and is now 2-for-2 on dirt with career earnings of $251,569. “This was about a month ago, but I had some friends over and I said ‘We have a big chance to win the Derby this year.’ I don’t usually say things like that, so that tells you what I think of him,” Casse told Fair Grounds publicity after the race.

The Derby is an obvious long-term goal, but as for immediate plans, Casse revealed “I’ll talk to Gary, but [the Grade II $400,000 Risen Star Stakes on February 16] would make the most sense, it’s why we’re here. We love this place and it’s a great place to get a horse ready. I don’t know that there would be a real reason to leave.”
Racing