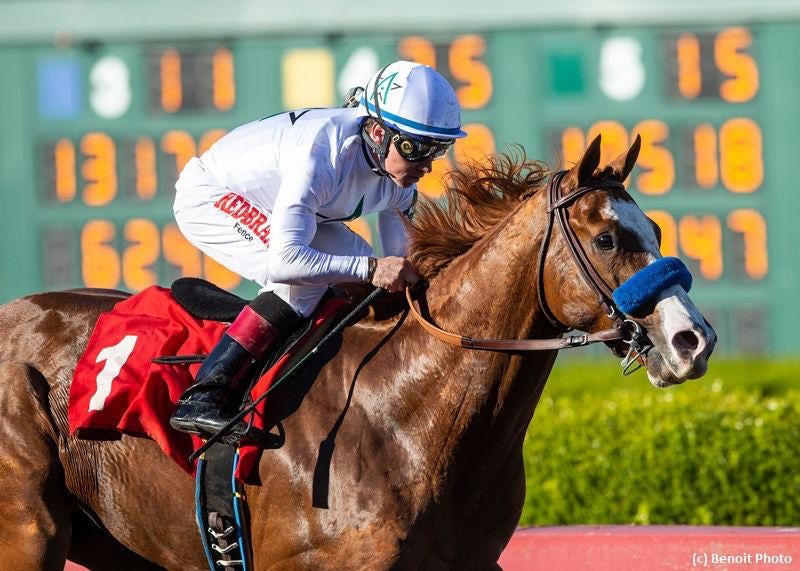 Question—which horse is the most talented two-year-old currently residing in the barn of Hall of Fame trainer Bob Baffert?

Prior to the running of the December 8th Los Alamitos Cash Call Futurity (gr. I) at Los Alamitos, most racing fans would have quickly answered , the three-time Grade 1 winner and probable champion two-year-old male of 2018. But then Baffert sent out Improbable to crush the Los Alamitos Futurity in the manner of a very good horse, raising questions about the true pecking order of the top colts in Baffert’s bountiful barn.

Improbable had already caught eyes with a powerful 7 ¼-length score in the Street Sense Stakes at Churchill Downs, and if anything, he was even more impressive in the Futurity. Sent off as the 1-5 favorite under jockey Drayden Van Dyke, the son of City Zip was a bit eager and headstrong in the early going, but soon settled down to race outside in third place as stablemate Mucho Gusto posted reasonable fractions of :23.25 and :47.25.

Then Improbable began to crank up the heat, edging closer during a third quarter-mile timed in a fast :23.57 seconds, and as the field swept into the homestretch Improbable pounced to the front, responding to urging from Van Dyke to throw down a fourth quarter-mile in a sharp :23.97 and a final sixteenth in :06.39 to win by five lengths. Even better? He stopped the clock in 1:41.18 and received a 96 Beyer, among the highest numbers posted by any two-year-old thus far this year. He also earned 10 qualification points on the Road to the Kentucky Derby.
Mucho Gusto, himself a promising colt with a victory in the Bob Hope Stakes (gr. III) under his belt, stayed on well to finish clearly second best, three lengths clear of the late-running Extra Hope. Coming home fourth was the Bob Hope runner-up Savagery, but he was subsequently disqualified to fifth for shifting out on the first turn and causing a chain reaction that forced Dueling to take up abruptly and race extremely wide into the turn. King of Speed trailed the field.

“At the top of the stretch (Improbable) looked a little lost,” Baffert told Los Alamitos after the race. “(Drayden Van Dyke) had to hit him a couple of times. Once he straightened out, he got into that long, beautiful stride of his. The good horses always find a way to win. He had trained like he was going to run like this.”

Baffert also praised Improbable’s stablemate. “I was really excited about (Mucho Gusto). He tried very hard and just got a little tired. His race was very encouraging. We’ll just let these horses come along at their own pace and hope they stay healthy. That’s the key.”

So now the debate begins—might Improbable wind up being a better horse than Game Winner? It’s impossible to say at this point, but Improbable is certainly staking his claim based on raw talent and speed figures, if not yet on overall accomplishments. Owned by WinStar Farm, China Horse Club International, and Starlight Racing—three of the partners involved with Baffert’s 2018 Triple Crown winner Justify—Improbable’s fast finish on Saturday suggests that he’s inherited a good dose of stamina from his damsire, the 1992 Belmont Stakes winner A.P. Indy. Coupled with the abundant speed Improbable has already displayed, it seems entirely possible that Game Winner’s stiffest competition next year might well come from his own stablemate.

A stablemate, mind you, that Baffert is already comparing to Justify.

“Improbable has a long stride like Justify. He’s just a smaller version,” said Baffert. “I’m not saying he’s at Justify’s level yet, but he’s a really good horse.”
Racing