Why I'm betting Pavel in the 2019 Suburban Stakes 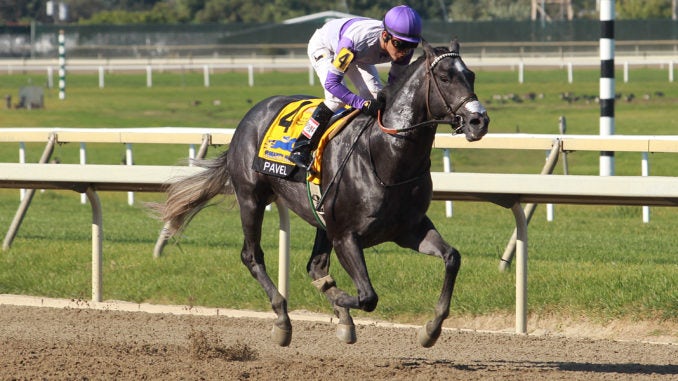 Once in a while, the world-traveling #11 Pavel steps up and runs a big race against top-class competition. I believe he could be ready to deliver one of his peak efforts in Saturday’s $700,000 Suburban Stakes (G2) at Belmont Park.

Pavel might be 0-for-3 this season, but his last couple of runs have been deceptively good. In the Dubai World Cup (G1)—held over the same 1 1/4-mile distance as the Suburban—Pavel was beaten just 3 1/4 lengths and finished fourth, which marked the second straight year Pavel rounded out the superfecta in the World Cup.

After returning to the U.S., Pavel shortened up in distance for the one-mile Metropolitan Handicap (G1), where he knocked heads against a deep and competitive field of classy grade 1 winners. Despite running a distance short of his best, Pavel ran evenly to cross the wire sixth, beaten just 6 1/4 lengths in a fast race.

Now Pavel is stretching back out to make his second start back from Dubai. Last year his second run back home yielded a clear-cut score in the Stephen Foster Handicap (G1) at Churchill Downs, so from a form-cycle perspective, he could be ready for an improved effort Saturday.

Pavel will meet an easier field in the Suburban than he’s accustomed to facing. This time around he won’t have to knock heads with the likes of Mitole, McKinzie or Thunder Snow. Many of his rivals are allowance or listed stakes winners, while others have done their best running at longer distances than they’ll encounter on Saturday.

Pavel’s fiercest foe is undoubtedly #1 Catholic Boy, a versatile grade 1 winner on both dirt and turf. Last summer Catholic Boy romped to a four-length victory in the 1 1/4-mile Travers Stakes (G1) on dirt at Saratoga, and he recently kicked off his 2019 season with a victory in the Dixie Stakes (G2) on turf at Pimlico.

Catholic Boy has made the turf-to-dirt switch twice in his career and prevailed on both occasions, so he should be dangerous in the Suburban. Catholic Boy has a strong reputation and will be heavily supported in the wagering, but Pavel isn’t slower in terms of Beyer and Brisnet speed figures, and his recent defeats should ensure he will start at an enticing price.

Let’s bet Pavel to win and key him in the exacta with Catholic Boy and #2 Preservationist.