Wiggle It Jiggleit wows them in Little Brown Jug

While thoroughbred racing fans were treated to the long-awaited and much-anticipated promise of a Triple Crown winner during the spring, harness racing fans watched the $675,000 Little Brown Jug on Thursday afternoon knowing that there could very well be three different winners of the sport's triple crown races for three-year-old colt pacers.
Dealt A Winner had posted a 26-1 shocker to capture the $320,000 Cane Pace at the Meadowlands on the Hambletonian Day card, while Revenge Shark posted a mild 9-1 upset to take the $500,000 Messenger Stakes at Yonkers Raceway last month. But heading into Thursday's Little Brown Jug at the Delaware (OH) County Fairgrounds, much of the focus was on one horse that failed as a short price in the Cane and then bypassed the Messenger.

Wiggle It Jiggleit arrived in Ohio having won both the $400,000 Milstein Memorial at Northfield Park and the $500,000 Battle of the Brandywine at Pocono Downs and then tuned up for the Jug by capturing a qualifier by 14 lengths in 1:50.2 at Harrah's Philadelphia. Like the 14 colts who would head to Ohio in hopes of upending the division leader and top-rated horse in North America, Wiggle It Jiggleit would have to prove he could win twice on Thursday in order to be named the Jug champion.

In the first division of the first heat of the Little Brown Jug, Lost For Words (David Miller) was sent out as the 1-2 favorite from the rail for trainer Brian Brown, while Dude's The Man (Corey Callahan), the runner-up to Wiggle It Jiggleit in the Meadowlands Pace and then after taking the Adios was second to Revenge Shark in the Messenger, was the 5-2 second choice from post four.

When the gate folded in the first division of the Jug's first heat, Lost For Words left alertly along the pylons to secure good early position, with Yankee Bounty (Yannick Gingras) away quickly and intent on gaining the lead. Yankee Bounty wrestled the advantage briefly from Lost For Words down the backside the first time, but the odds-on choice regained the lead from the Maryland-bred gelding nearing a 27 flat opener.

Lost For Words led the field past the packed grandstands the first time and by the midway mark in 55.3, with Dude's The Man taking up the unenviable task of racing first over. Lost For Words showed the way down the backside and by three-quarters in 1:23.1 and Dude's The Man loomed outside of him, with Yankee Bounty tucked comfortably in the pocket.

Around the final turn, however, Lost For Words would prove to have plenty left in reserve while Dude's The Man gave way after a prolonged first over journey and failed to earn a berth in the final. Yankee Bounty protected the pocket throughout and angled out late to gain the place spot, but Lost For Words lived up to his role as the choice by prevailing in 1:50.2 for his fifth win in 12 starts on the season.

Just over 20 minutes later the focus was squarely on Wiggle It Jiggleit (Montrell Teague) who would leave from post five as the 1-2 favorite. Artspeak (Scott Zeron), last year's two-year-old pacing colt champion, was the solid 2-1 second choice from the rail. He had chased Wiggle It Jiggleit for naught on several occasions this year, but soon after the start it was evident Zeron wanted to try a different tactic.

When the gate folded in the second division of the Jug's first heat, Artspeak left very alertly along the rail and My Hero Ron (Gingras) left well from between horses to secure the pocket. Wiggle It Jiggleit left well seeking to gain the lead down the backside, but Artspeak was not about to yield the lead and they dueled by the opener in 26.4. 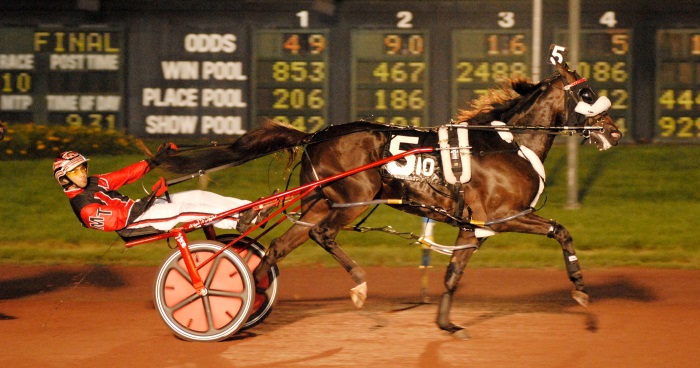 As the field came by the grandstands the first time, Artspeak refused to yield the lead as Zeron left Wiggle It Jiggleit parked out where the favorite looked doomed. But as the field rolled by the half in 54.3 and down the backside and by three-quarters in 1:21, Wiggle It Jiggleit was not about to give way. In fact, despite racing parked first over throughout, Wiggle It Jiggleit eventually wore down Artspeak to score in 1:49.2 for his 17th win in 19 starts on the season.

After the post positions were drawn for the $325,000 second heat of the Jug, Wiggle It Jiggleit had gotten the rail and he would eventually go postward as the 2-5 favorite, while Lost For Words got post two and was the 3-1 second choice. Artspeak drew post three, with Yankee Bounty alongside him in post four. My Hero Ron kept Gingras, however, despite getting post six while Split The House scratched out of the final after rallying the get fourth in his division.

When the gate folded in the Jug second heat, Lost For Words and My Hero Ron were clearly the two quickest horses through the first turn, while Wiggle It Jiggleit settled into third. Initially it looked as though Teague wanted to yield the pocket and then brush to command past the quarter, but Lost For Words rebuffed him as they sped by the opener in 27 flat and by the midway mark in 54.1.

Lost For Words and Wiggle It Jiggleit dueled for command down the backside and by three-quarters in 1:21.3 where the overland journey and hot pace figured to take its toll on the favorite. But Wiggle It Jiggleit would prove resolute in the lane and the gutsy gelding shifted gears again 100 yards out and wore down Lost For Words in the final strides to win by a nose in 1:49.3.

A son of Mr Wiggles, another prominent George Teague, Jr. trainee, Wiggle It Jiggleit has now won 18 of 20 starts and earned over $1.65 million this year. Having already captured the Meadowlands Pace, Milstein Memorial, Battle of the Brandywine and Max Hempt Memorial and now the Little Brown Jug, Wiggle It Jiggleit has already secured divisional honors and looms as the odds-on choice to garner the horse of the year title.
Racing
Loading...