Will a Top 3 Year Old Emerge From Haskell or Jim Dandy?

The announcement on July 25 that Triple Crown winner Justify had been retired means that it's now on to take Justify's spot as the top active 3-year-old in the nation. Sure, the best 3-year-old from July 25 through the end of the year won't win Horse of the Year or top 3-year-old of the year.

Then again, Bob Baffert saddled Arrogate to win in the Travers Stakes and the Breeders' Cup Classic a couple of years ago. Would that trump a Triple Crown? Probably not because of the mystique of the Triple Crown.

Still, it's something to think about. The quest to take up Justify's mantle begins this weekend when Saratoga runs the Jim Dandy Stakes and Monmouth runs the Haskell Invitational.

Will a top 3 year old emerge from either race?

Will a Top 3 Year Old Emerge From Haskell or Jim Dandy?

What 3-Year-Old Could Emerge from the Jim Dandy Stakes? 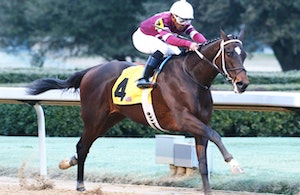 finishing 5th. His next victory wouldn't come until late November in the Clark Handicap.

Will this year's Jim Dandy produce a horse that could challenge in the Travers and possibly the Breeders' Cup Classic? Hard to say. Only 5 sophomores will enter the fray:  Flameaway, Tenfold, Reride, Sporting Chance, and Vino Rosso.

Vino Rosso projects to go off as the favorite. He had to go wide in the Belmont Stakes and just couldn't keep his momentum up after having run around the turn. He finished 4th. He's become Pletcher's top 3-year-old now that Magnum Moon is retired and Audible has been taken out of training.

Flameaway folded in the Ohio Derby. This smaller field should help him carry his speed further. Still, Flameaway, Sporting Chance, and Reride all appear to be a cut below Vino Rosso and Tenfold.

Tenfold posted the best Brisnet speed rating of his career in the Belmont. In fact, his Bris speed ratings have gone up in every subsequent race. He could emerge as a top 3-year-old on Saturday.

What 3-Year-Old Could Emerge from the Haskell Invitational?

A field of 7 has entered for the $1 million Haskell Invitational on Sunday. Most believe that 6/5 chalk Good Magic is unbeatable. I'm not so sure.  This field is deeper than the Jim Dandy because Bravazo
might be just as talented as Good Magic. That doesn't mean Bravazo should emerge as a top 3-year-old after this race.

What's wrong with Core Beliefs? The Quality Road runner took home the Ohio Derby after chasing fast fractions. What was impressive about his Ohio Derby victory is that he often runs near the lead. That could serve him well here because he was patient to win the Ohio Derby. That makes him a horse that learned something in his last race.

Sure, Justify and Bolt d'Oro put a beat down on Core Beliefs in the Santa Anita Derby. That race was ages ago. He improved tons in the Peter Pan and then put it together in the Ohio Derby.

I believe with a win in the Haskell, Core Beliefs could become a serious Travers Stakes contender, which would make him a serious 3-year-old the rest of the year.