Sunday afternoon's $200,000 Southwest Juvenile Championship (G1) at Zia Park features a very deep field of 2-year-olds. They will race 440 yards, the "classic" Quarter Horse distance in an effort to put themselves in contention for AQHA year-end champions awards.

One of the top contenders is BV Midnite Express, a multiple-stakes winner from the barn of Eddie Lee Willis. The son of Freighttrain B won the $1.1million Heritage Place Futurity (G1) at Remington Park at the end of May. He was then shipped to Ruidoso Downs where he competed in trials for the All American Futurity. He did not make the top ten, but gave a good account of himself in taking the the 440-yard, $200,000 All American Juvenile Invitational Stakes. Regular rider Russel Hadley will pilot BV Midnite Express and drew post position ten in the 12-horse field. Game Changes is a gray son of Game Patriot trained by Umberto Belloc. The gelding has won three of his last four outs, but was defeated by BV Midnite Express, in the All American Juvenile Invitational. Larry Gamez has the call.

Texas-bred This Is A Deal ran second in the $621,000 Sam Houston Futurity (G2) last April and also qualified for the $1 million Texas Classic Futurity (G1) at Lone Star Park. Francisco Calderon rides from the seventh post position. Talented filly, Miss Feet Down, will be gunning for her fourth consecutive victory. The daughter of Dominyun trained by Carlos Alvidrez, The filly drew post 11 and will be ridden by Oscar Cordova.

Jockey Ricky Ramirez was the top rider by earnings in November and will pilot My Royal Wagon, an Oklahoma-bred, sired by Pyc Paint Your Wagon. He is listed at odds of 20-1, but has never missed a check in seven career starts. His best finish in a graded stakes was a third to Tres Friends in the Rainbow Futurity last July at Ruidoso Downs. 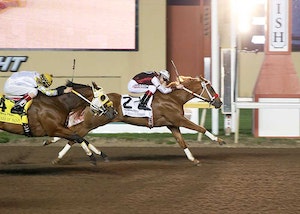 Post time on Sunday is 12:00 pm (Mountain). The Southwest Juvenile Championship will run as the 11th race on the card.