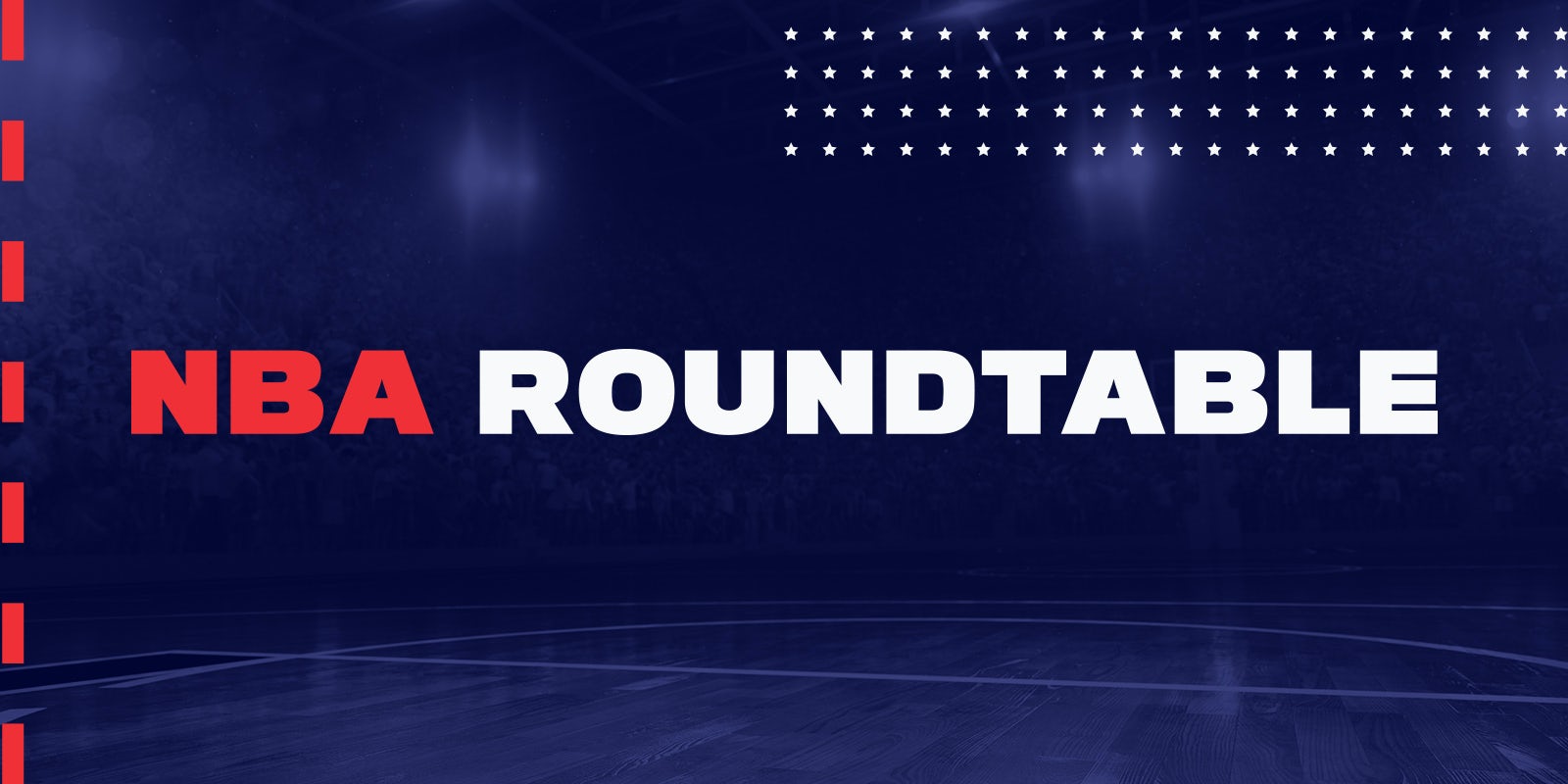 BetAmerica has teamed up with Covers and Oddschecker to break down the latest news and trends from around the Association. This week NBA columnists Andrew Caley, Sam Farley, and Ryan Murphy discuss the Western Conference playoff picture, Andrew Wiggins’ fit with the Warriors, and Cleveland’s imposing frontline.

The Western Conference playoff picture is still extremely muddled. Which team outside of the top eight has the best chance of sneaking in?

Andrew: Fans (and likely the NBA for that matter) are cheering for Zion Williamson, the Spurs are still trying to make the playoffs for the 23rd straight year, but for me, the best bet has got to be the Blazers, and it’s pretty simple really. First, they are the closest to the eighth seed, trailing the Grizzlies by 2.5 games in the standings. Second, the Blazers know what it takes to go on a deep playoff run and can draw from that experience down the stretch this season. And third, they have the best player whose team is currently not in the playoffs in Damian Lillard. Dame is scorching hot right now, averaging 38.4 points and 9.0 assists and shooting a ridiculous 48% from deep over the last 14 games. He’s capable of getting the Blazers back to the playoffs.

Sam: Who is realistically at threat of dropping out? I’d say the Thunder and Mavs are at risk but it’s primarily the Grizzlies, who have only two wins more than Portland and five on the Spurs. That means we probably only have one slot up for grabs. I’d love to see Ja Morant get into the playoffs, both for his on-court play and his Twitter action too, but I think it’ll be a struggle for that roster to maintain its momentum. So, we’re left with a shootout between Damian Lillard, who is playing out of his skin right now, and the Spurs, who have an incredible coach. I’m a believer in the importance of coaching so I’d back Spurs to grab that eighth spot. The dark horse could be the Pelicans though, who currently sit on 22 wins, the same as San Antonio. Zion Williamson’s finally playing, and that young core is showing its talent. Imagine New Orleans battling Memphis for the final playoff spot with the Rookie of the Year award on the line. That could be some ending!

Ryan: I’ll take Portland in a heartbeat. The Blazers have won seven of their 10 games and have impressive victories over the Rockets, Jazz, and Spurs during that span. As good as Terry Stotts’ crew has been lately, I expect them to be even better by March when Jusuf Nurkic makes his long-awaited return. The Bosnian Beast averaged 15.6 points and 10.4 rebounds per game last season and gives Portland a fierce presence in the paint. The Blazers don’t have enough talent to compete for a title, but a seventh straight trip to the playoffs is well within reach.

Andrew Wiggins had an impressive debut with the Golden State Warriors on Saturday night. Will Steve Kerr finally be able to unlock his potential?

Andrew: If you’re asking will Kerr extract the potential that came along with Wiggins when he was drafted, then I’ll say no. But he doesn’t need to do that, and Wiggins doesn’t need to be that. He just needs to be a good player on what will be a roster of great players once again next season. And I think Kerr is the guy to unlock at least some of that potential. Particularly, if Kerr can get Wiggins to buy into playing some defense, he can be a better version of Harrison Barnes when the Warriors rolled out their original “death lineup” during their first title run. There will be very little pressure on Wiggins to carry the team moving forward and I think this move will be the best thing for his career. The Dubs could be scary again in 2020-21.

Sam: Wiggins to the Dubs was the most exciting trade we saw before the deadline. He’d become something of a meme and a punchbag for criticism with the Timberwolves, but let’s not forget his talent. It feels like he’s been around forever but he only turns 25 this month. He’s a former first overall pick and he’s shown flashes of his potential throughout his time in Minnesota. If we learned anything from Jimmy Butler’s time with the Timberwolves, it’s that they’ve fostered a non-competitive environment. That won’t be the case in the Bay, and Steve Kerr will be the man to help Wiggins realize his immense potential. Next season he’ll be alongside Steph Curry and Klay Thompson and could turn out to be a huge addition to that franchise. I absolutely love this trade and can’t wait to see him in action with fully-fit Warriors line-up.

Ryan: Kerr has proven himself to a superstar whisperer. Before arriving in the Bay, Draymond Green was a part-time starter averaging 6.2 points per game. Now he’s a three-time All-Star and Defensive Player of the Year. Kerr also worked wonders with Steph Curry, who became the NBA’s leading scorer after one year in his offense, and Klay Thompson, who made his first of five All-Star teams and became one of the most devastating sharpshooters in NBA history under Kerr’s watchful eye. Kerr knows how to connect with players and is precisely the right coach to light a fire under Wiggins and unleash his enormous potential.

Cleveland now has one of the best frontcourt rotations in the NBA with Andre Drummond joining Kevin Love and Tristan Thompson. What do you expect from the Cavaliers during the second half of the season?

Andrew: Sure, you can call it one of the best frontcourts in the NBA. Congratulations. The Cavs are the favorites for 2005 NBA title. Cleveland now has one of the most outdated rosters in the NBA and it did not get off to a good start. The Clippers handed the Cavs their worst home loss in franchise history in Drummond’s debut. But Drummond did what you expect with 19 points and 14 boards in loss. So, what do I expect from the Cavs? Maybe be like the 19-win Pistons? Not, good. And just in general, I feel a bit bad for Drummond, going from one terrible Midwest team to another. That’s tough.

Sam: I was expecting a boost but after a franchise record loss to the Clippers I’m not so confident. Do we think the overall roster is that balanced though? I’m not convinced and I’m not sure this frontcourt will be enough to paper over the cracks. I’d expect a varied end to the season, some low points mixed in alongside some dominant performances. This isn’t a good team but they will have their moments and could potentially scupper some team’s playoff aspirations down the stretch.

Ryan: Cleveland’s frontcourt isn’t the problem. Drummond, Love, and Thompson are all seasoned vets who can hold their own. My concern is with the Cavs’ backcourt, which is greener than a Wisconsin pasture. The problems begin with rookie Darius Garland, who has looked completely overwhelmed at the point this season, and extend to Collin Sexton, who is an infuriatingly selfish player who only has eyes for the rim. Together they combine for 4.8 turnovers a game and are killing the Cavs with their sloppy, inconsistent play. Both players should have long careers, but their timeline simply doesn’t mesh with the rest of the team’s veteran talent. I expect more growing pains this season and a depressing last place finish in the Central Division.

Place a bet of $5 or more and get $20 in free bets from BetAmerica!